Trading Update in Bunkerspot: An Interview with CEO Carsten Ladekjær 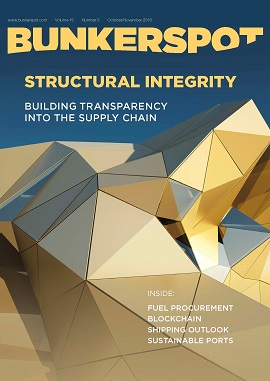 A harsh commercial environment for shipping and the bankruptcy of OW Bunker have certainly taken their toll on bunker trading companies. Carsten Ladekjær, CEO of Glander International Bunkering, tells Lesley Bankes- Hughes that while bunker sector consolidation is still an ongoing process, the role of the trader will increase in importance after the 2020 watershed.

There can be no argument that the collapse of OW Bunker turned the bunker, sector upside down. Since late 2014, the industry has been engaged in a very long process of rehabilitation – and recalibration – with each stakeholder in the marine fuels supply chain taking stock of how it conducts its business and re-evaluating its relationships with the many other players who are also, directly or indirectly, engaged in each and every bunker transaction.

The buzz words or phrases of early 2015 – counterparty risk, due diligence and transparency – now sit firmly in the bunker industry lexicon, and the process of consolidation within the marine fuels business is, as press headlines continue to remind us, an ongoing, often brutal, but necessary activity if physical suppliers and traders are to survive in what continues to be a tough and volatile market for shipping.

As the bunker industry continues to pick itself up after the fallout from OW, the IMO’s 2020 0.50% global sulphur regulation looks set to shake things up again, both commercially and operationally. New concerns over fuel quality, availability and compatibility and fears over impending fuel price volatility will set more challenges in the path of physical supplier and traders. Shipowners who comply with the IMO regulations are said to be facing a 35%-55% hike in their fuel bills after 2020, and, as always, it will be bunker industry that ensures that the fuel supply chain works, 24/7.

As fuel prices surge in 2020, fuel buyers will certainly be asking traders for higher levels of credit, so how will traders respond, and will there be some casualties along the way?

According to Carsten Ladekjær, CEO of Glander International Bunkering, ‘Anything is possible – we do expect the demand for credit to surge, and those who can meet this demand will have opportunities.

As traders are called on to increase their credit lines to buyers as fuel costs climb, could trading companies seek to alleviate the financial pressures by reducing credit periods? Perhaps, says Ladekjær.

‘I do see a possibility that we may see a correction in credit days in the supply chain,’ he suggests.

‘For a period, say from late 2014 into early 2017, shipping companies have enjoyed ample and cheap access to a financial buffer from trading companies, which for many has been a life-saver. However, as liquidity becomes a scarcer resource, whilst demand for it goes up, things are likely to change to some degree.’

As mentioned earlier, the marine fuels sector has experienced a severe contraction over the past four years, with several familiar names failing to survive in an increasingly tough and competitive commercial environment.

Ladekjær believes that bunkering could see itself become an even leaner industry in the future: ‘I don’t think consolidation will ever end,’ he says.

‘I think we will continue to see acquisitions and mergers in our industry, and most likely we will also continue to see new players enter the market and others leaving it. Having said that, I also agree that our industry remains quite fragmented with various players filling different roles.

‘I certainly believe we will see more M&A. And again, those who are well positioned for the coming changes will prosper, whilst others may seek a haven by joining these companies, either as individuals or as a unit.’

After OW, traders looked in danger of finding themselves pushed out into the cold, as industry commentators predicted that shipowners and operators would rush to circumvent the middlemen and do business with physical suppliers directly. It would be fair to say that there was initially a perceptible shift away from using traders, and in the early days a lot of traders were pretty voluble in trying to justify their existence.

Some in the industry are still predicting the demise of the smaller, mid-sized trading companies, but other, perhaps more pragmatic, observers continue to say that the shipping industry and the physical suppliers cannot do without the bunker traders – the financial risk they take on and the liquidity they provide cannot be ignored.

Ladekjær agrees that traders lost a little ground after OW’s demise, but he thinks that the situation has now changed around, and he is certainly confident about the key role traders will play after 2020.

‘I see the role of the trader becoming more important to the industry than ever before,’ he emphasises.

‘Yes, there were several buyers who got hit by the OW collapse, and who were seeking to go direct to suppliers in the period post OW. Meanwhile, going back to the know your counterparty issue, a lot of them have returned to include larger and financially strong traders amongst their vendors.

‘Traders do bring a lot of value to the supply chain, and fortunately we have many satisfied customers and suppliers who are very appreciative, and who acknowledge that trading companies play a vital role in keeping the shipping industry afloat and moving.’

Ladekjær also acknowledges that the large commodity traders are building a higher profile in the bunker industry. This shift was predicted by a few industry commentators in the aftermath of OW. While building their position in the marine fuels business may have taken longer than some had expected, their visibility in the sector is certainly growing now.

‘I guess the commodity trading houses see opportunity and space to play within the bunker market, now and post 2020,’ he comments.

‘We will see a new product menu come onstream, and some of these new products most likely present opportunities for the commodity traders. As a traditional bunker trading company, we welcome them, as they can also bring value to the market in their own right.’

For many years, the trading business model has been one of volume growth, so is this an approach that still holds true? ‘I think we are seeing a slight paradigm shift there,’ he responds. ‘Since the oil prices have rebounded, more and more bunker companies are returning to focus on the Return of Capital Invested (ROIC), or risk versus reward if you like, rather than stirring themselves blind on pure volume growth.’

However, he points out, where oil prices head in the future will inevitably play a pivotal role in deciding whether this trend will continue or not.

New technology, across many global business sectors, is facilitating and underpinning a drive for more transparency and best practice in the way that commercial transactions are handled. The bunker industry is no exception, with the use of mass flow meters gaining traction, electronic bunker delivery notes on the way and a block chain bunker delivery pilot programme already in place. However, a predicted widescale uptake in the use of online trading platforms for the marine fuels has not yet materialised. So, does Ladekjær think there will be a growing appetite for online trading in the future?

‘That’s a good question,’ he says. ‘Digital evolution, or disruption, have been buzz words for the past couple of years.

‘I could be wrong, but I do not foresee any major disruption happening in the bunkering space in the next few years. Meanwhile, I do believe we will continue to see technological advancement, which will influence the way we conduct business.’

Looking to the 2020 deadline, Ladekjær says the list of challenges for traders is a very long one. ‘There are so many,’ he says. ‘I like the phrase “along with every challenge comes an opportunity”, but some of the headline issues for traders include credit, liquidity, compliance, regulation, product compatibility, supply, demand and advisory services.’

The concept of disruption in the bunker sector will certainly come into play after 2020, he predicts, but the situation will eventually balance out.

‘We should be prepared for some change in trade patterns and product flows. The main ports will most likely continue to offer a full range of products, whereas availability of HFO and even the new 0.50% sulphur products may be scarce short to mid-term in some medium ports and niche ports.

‘However, supply and demand will then sort things over time after that.’

The Glander CEO suggests that many shipowners and operators will play a waiting game after 2020, opting to run their vessels on distillates until they see how possible quality and availability issues associated with these blended fuels play out, or before they decide to take the plunge and purchase scrubbers in order to capture the price benefit of an anticipated very low-cost high sulphur fuel oil.

‘A lot of companies are still sitting on the fence,’ he says, ‘and at which ratio [compliance choices] will happen is hard to say, but we are of course trying to get a feel from our clients around the world.’

He notes that some suppliers have already begun to offer 0.50% sulphur fuels while major shipping lines are also initiating trials of the product as part of their preparations for 2020. However, he believes that the major uptick in demand for very low sulphur fuel oils (VLSFOs) will come during Q2 2019 and beyond.

Ladekjær is less positive over the demand for marine LNG at the 2020 tipping point: ‘We can offer LNG but so far demand is very limited, and so are the supply options,’ he remarks.

In terms of potential demand for HFO after 2020, he shares the viewpoint of many in the industry.

‘The big question is the pace and the 2020 compliance ratio. However, while we move closer to the actual date, the picture will become clearer.’

The shipping and bunker markets have reacted with understandable concern to the recent cases of fuel contamination in bunkers lifted in the US Gulf, Panama, Singapore and, according to anecdotal evidence, other global ports.

Many in the industry are seeing this as a wake-up call for what might happen when 0.50% sulphur blended fuels feed into the marine fuel supply chain in 2020, and some are calling for fuel sampling tests that go beyond the parameters laid out in ISO 8217, as well as the introduction of more standardisation in the tests carried out by fuel analysis laboratories.

Ladekjær understands the level of concern but emphasises that the potential for such problems can never be completely eliminated.

‘Once the root of a problem is identified, it is easier to take precautions. Meanwhile, it is difficult (or should we say almost impossible) to safeguard yourself against the unknown in advance – I guess the best you can do is to have a solid, reliable and trustworthy counterparty.’

He continues: ‘Again, once a problem is identified, you can take a range of precautions. We’re having a very close dialogue with all our suppliers, we’re sourcing from people who do not have exceptions on ISO 8217 Clause 5, etc., and we also pre-test our own stock as much as possible prior to selling it.’

Life has certainly not been easy for the bunker industry since the global economic downturn in 2008, and the sector also took a severe broadside hit when one of its biggest names exited the market in November 2014. Incoming emissions regulations will again introduce uncertainties and volatility into the marine fuel supply chain. So, given past – and future challenges – does Ladekjær still enjoy navigating the twists and turns of bunker fuel trading?

‘Absolutely,’ he responds. ‘This industry is in my blood and I cannot see myself doing anything else. ‘I love working with people of all nationalities and cultures, in a fast-paced industry where every day is different from the last, and where the people that I have the privilege of working with are as passionate about the shipping and bunker industry as I am.’